Lena Hernandez, the woman accused of racist tirades against Asians in Torrance over the past year, has been sentenced to 45 days in jail for attacking a woman at a mall last year.
KABC
By Jessica De Nova and ABC7.com staff 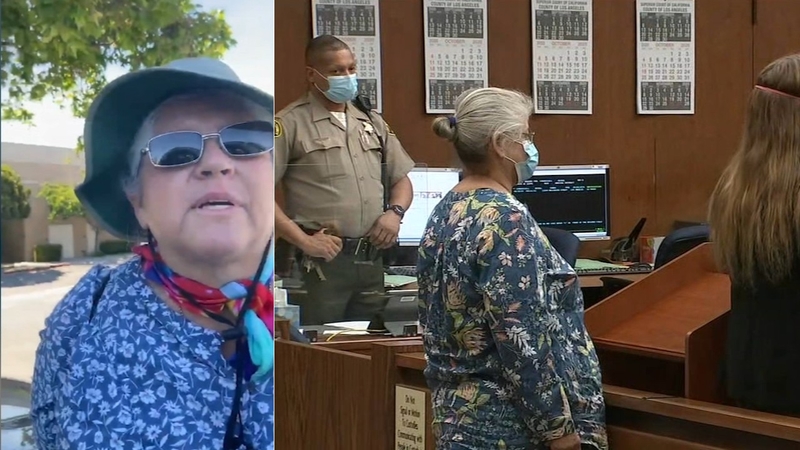 TORRANCE, Calif. (KABC) -- The woman accused of racist tirades against Asians in Torrance over the past year has been sentenced to jail for attacking a woman at a mall in 2019.

Lena Hernandez, 54, of Long Beach, agreed to plead no contest to misdemeanor battery in exchange for a sentence of 47 days in county jail plus three years probation with anger-management classes. She was also ordered to stay at least 100 yards away from the victim and the mall where the attack happened.

The victim of the attack, as well as others outraged by her racist words, are not happy, saying Hernandez should have done more time.

Hernandez was caught on camera at least twice this year delivering rants at a Torrance park directed at Asian-Americans.

In one incident she told a woman who was exercising in the park to "Go back to whatever (expletive) Asian country you belong in."

In another, she spoke in a mock Asian accent, telling a man at the park to "go home" and calling him "Chinaman."

After those incidents came to light, Salminao spoke out on Twitter saying she had been assaulted by Hernandez at the Del Amo mall in Torrance last year and police took no action after she filed her report.

The victim said Hernandez was verbally assaulting a custodian at the mall and when the victim tried to intervene, Hernandez assaulted her and pushed her to the ground.

"She shoved me to the ground," according to Salminao's victim statement read in court. "I attempted to stand my ground. She pulled my hair, held my head to the ground and punched me multiple times on the back of my head."

In court, she urged the judge to reject the plea deal, saying she continues to endure psychological trauma from the attack.

"For nine moths I could not go to the places we enjoyed because I feared having to see her again in our community," she said.

I filed a police report on this same lady back in October 2019 due to a physical attack ON ME. Nothing came of it. What are you going to do about it NOW? @TorrancePD pic.twitter.com/mKObXxxDba

Following the heightened attention to the viral videos of the park tirades, the Torrance City Attorney's Office over the summer filed a criminal complaint for battery against Hernandez, a misdemeanor.

Police arrested Hernandez in July for misdemeanor battery in the mall attack.

An attorney for Salminao said the sentence was insufficient, and sends the wrong message to others.

"What message does it send to other perpetrators, other violent racists out there that you can just assault someone, you can push them to the ground and only walk away with a 45-day sentence?" said attorney Sandy Roxas.