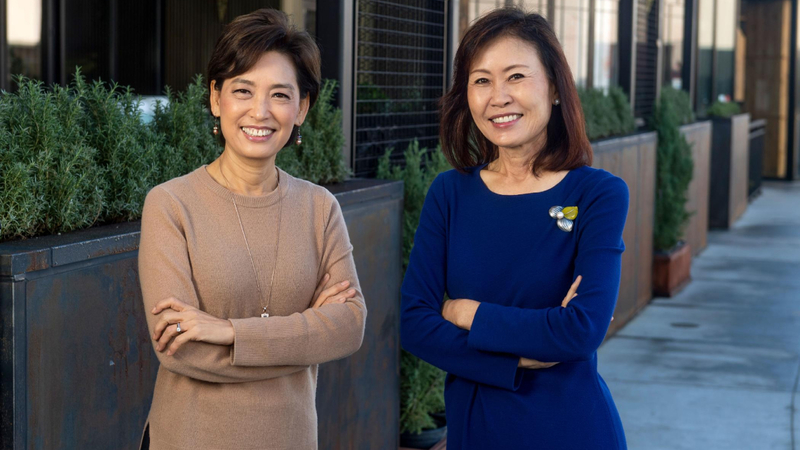 Reps. Young Kim and Michelle Steel never imagined that the first time they would testify before Congress as new lawmakers it would be to call out hate against their community.

But the California Republicans eagerly joined other Asian American lawmakers as witnesses in a House Judiciary Committee hearing last week intended to put the spotlight on discrimination, which took on more urgency in the wake of the mass shootings of Asian Americans in Atlanta earlier in the week.

"This should not have to be said, but I want to be very clear. No American of any race or ethnic group is responsible for the Covid-19 pandemic. The virus does not discriminate, it affects everyone," Kim testified.

"Combating hate is not a partisan issue. We can all agree that violence against any community should never be tolerated," Steel later added.

Kim and Steel are the first Republican Korean American women to ever serve in Congress, sworn in along with history-making Rep. Marilyn Strickland of Washington state, a Democrat of Korean descent, in January.

"We are tough cookies. We're tiger moms. Don't mess with us," Kim said with a smile during an interview alongside Steel on Capitol Hill ahead of the hearing.

It is strength they have needed much of lately.

U.S. Rep. Young Kim of Orange County was one of many lawmakers who voted to remove Rep. Marjorie Taylor Greene from committees on Thursday -- but the only Republican from California to side with the mostly-Democratic move.

The group Stop AAPI Hate -- formed to track violence against Asians at the start of the pandemic -- says it received at least 3,795 firsthand reports of anti-Asian hate nationwide in the past year, which they call an alarming rise.

And nearly 45% of those reported incidents happened in California.

Dealing with racial bias is par for the course for both Kim and Steel, especially since entering politics.

Steel said she's been on the receiving end of ugly racism since she won a seat on the California State Board of Equalization in 2006, which oversees several state taxes.

"The worst one was 'we don't eat dogs like you do,'" recalled Steel. She cleaned up another slur as "racist bitch" and said -- tongue in cheek -- that her "favorite" attack was someone calling her "Chairman Mao."

"You just ignore it. You do the better job. You have more enemies out there. Especially if these people are not really enemies, but they try to find somebody that they can blame," Steel said.

Kim has been outspoken against language like "Kung Flu" used by her fellow Republican and former President Donald Trump.

"That was a very insensitive remark," she said of Trump's Covid-19 label.

"To bring all these hateful comments and attack and call out the Asian American community as the community that is responsible for what we're facing right now, especially through the pandemic, this is completely wrong, insensitive," she said.

When asked if the racially charged names for coronavirus used by Trump contribute to discrimination against Asian Americans, Kim made clear that the answer is yes.

"The words of the leaders have consequences. They need to be careful about what they say because people really take that to heart," Kim said.

"People cannot work, and they cannot put food on the table for their families. They have to do something about it and then we are the victim. Asian Americans just became the victim. We really have to change that," Steel said of the compounding struggles of the pandemic, job losses and discrimination.

Not only do Kim and Steel both represent southern California House districts, but they have also been close friends for over 30 years. Their husbands were "sports buddies" in the mid-1980s and thought their wives would hit it off. They were right.

The women became fast friends, raising their children and vacationing as families together.

"Every summer we went camping together. Every winter we went skiing together with the kids," Steel recalled. She has two children and Kim has four, all of whom are now grown.

They even learned that Steel's mother and Kim's father-in-law taught high school together in South Korea and found a picture of the them together there.

"I'm looking at this over the last several decades, how we've come very far from being housewives to serving together," Kim mused.

They both said it was their husbands who were initially very involved in politics. Kim remembers being shocked when her friend told her that she would run for office for the first time.

"She was telling (her husband) Charles, 'There's no way I'm going to get into politics. I'm happy being a housewife. And I'm happy just raising our kids together, having all of these family vacations together,'" Kim recalled about Steel.

But in 2006 a spot came open on the California Board of Equalization.

"I heard that seat opened," Steel said, "so I told my husband, 'I'm running.' His jaw dropped because he was in politics such a long time. 'With your accent, you sure you want to do it?'" she recalled her husband saying.

"'It's going to be very tough because everybody will try to pull you down,'" Steel remembered him saying. "I said, 'I think I can do much better job than anybody else to help small businesses,'" Steel added, noting that her husband was very supportive once she made her decision.

With incidents of anti-Asian hate crimes on the rise during the pandemic, two SoCal congresswoman are introducing a measure to help protect the AAPI community.

Steel immigrated to America from South Korea at age 19, and said she was inspired to become politically active after her single mother -- who owned a sandwich shop and didn't speak much English -- got hit with what she said was an unfair tax bill.

Later, she served as the chairwoman of the Orange County Board of Supervisors.

Kim was also born in South Korea but grew up in Guam, and settled in Los Angeles after earning an MBA. In 1990, she got a job with then-California state Sen. Ed Royce and stayed with him when he was elected to Congress.

She said Royce initially hired her after redistricting in 1990 made clear that he would be representing more Asian Americans.

"We really worked towards building relationships with the Asian American community. That also helped me, personally, for over two decades, working with him, really connecting myself and being the person, the go-to person in the Asian community," said Kim.

It also served as a training ground.

"Being able to work with him for about 21 years in Congress, I always thought, 'Okay, at least I know a little bit about how Congress works. Maybe I can get myself here,'" she added.

Kim and Steel both beat one-term Democrats who won their districts in the 2018 blue wave. They helped usher in the largest group of House GOP women ever, though still far less than Democratic women.

Kim says she gravitated toward the Republican Party while studying accounting at the University of Southern California in 1984 during the Reagan administration, when his tax cuts were moving through Congress.

"I looked at some of the policies that was going through, and then I really thought, okay, Republican Party is a party that really resonate with me. We're talking about limited government, but at the same time, individual responsibility. It's a party for me," said Kim.

For Steel, it was not only her mother's experience with a big tax bill, but also school choice that drew her to the GOP.

"I wanted to choose the school where I want to send my kids to. So that's the way I got into politics. And I told my husband, I have to be a Republican," Steel recalled.
EMBED More News Videos

Actor Daniel Dae Kim talks about his sister being a victim of a hate crime.

Now that they're in Congress, they are hoping their diverse backgrounds can help broaden a Republican Party that polls show is becoming more White and more male nationwide.

Having seats at the table, Kim said, will demonstrate "the changing dynamics of our Republican Party."

But the Republican party is changing in a lot of ways.

Georgia Rep. Marjorie Taylor Greene -- who has spread conspiracy theories -- is also in their freshman class. Steel condemned QAnon and called Greene's comments dangerous but stopped short of voting to strip her of committee assignments.

But Kim voted yes on that.

"It was, for me, a vote of conscience and a check on my own moral compass. I wanted to make sure that we sent a message that no such comments belong in our Republican Party."

Two and a half months into their terms as congresswomen, these two immigrants are quite candid about the weight of the history they made the minute they were sworn in.

"I was looking at that building, I said, 'I am one of the 435 working on the inside of the building.' Well, you know what? I had the teary eyes. It was just amazing," Steel said while standing with her dear friend Kim outside the Capitol.

The fact that they can do it together and rely on each other -- decades-long friends -- for advice and support is a huge bonus, especially given the trauma Asian Americans are dealing with because of increased violence against them.

Representing them well, especially at such a highly sensitive time, is on her mind.