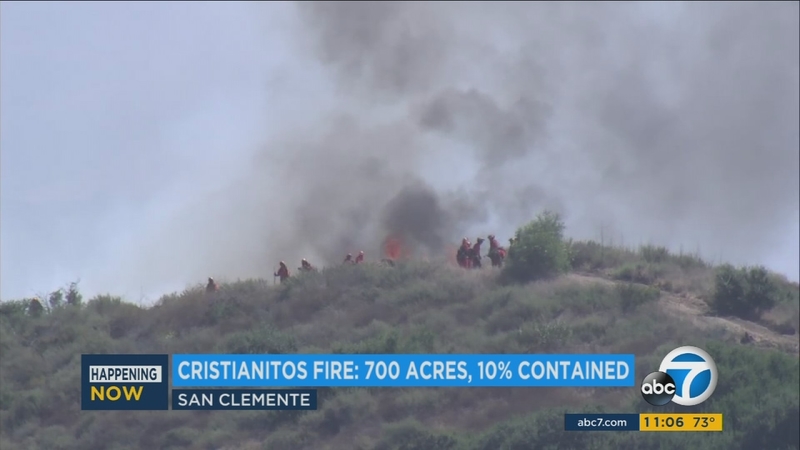 More than 200 firefighters were attacking the flames from the air and on the ground, according to the fire authority, which set up a unified command with Marine Corps Base Camp Pendleton.

An aggressive attack and good weather have helped the firefight.

"What you have now is a low-intensity fire. It doesn't burn very hot, but it does burn very fast, and that's why it was able to gobble up so much acreage in such a short period of time," said OCFA Capt. Larry Kurtz.
No injuries have been reported.

"We're trying to eliminate most of the hazards," said Mike Yeun, an OCFA spokesman. "There are some houses on the other side of the ridge that we're definitely concentrating on, but hopefully we can keep this under 1,000 acres."

The firefighters were assisted Thursday by a marine layer and a lack of windy conditions.

By late Thursday the area appeared to be mostly white smoke and charred hillside - very different from the raging flames that lasted well into the previous night.

"It looked like hell on earth, it was an inferno," said San Clemente resident Montell McHenry. "But right now, beautiful skies. You can see the wind, it's kind of clear."

Officials expect the containment numbers to rise through the evening.

"There are no homes threatened but we do have crews in the neighborhoods just in case," Kurtz said. "We can't let our guard even for one second."