EDD claims California man is in prison, orders him to return his jobless benefits

The EDD believes he is in prison and ineligible for unemployment.
KGO
By Michael Finney 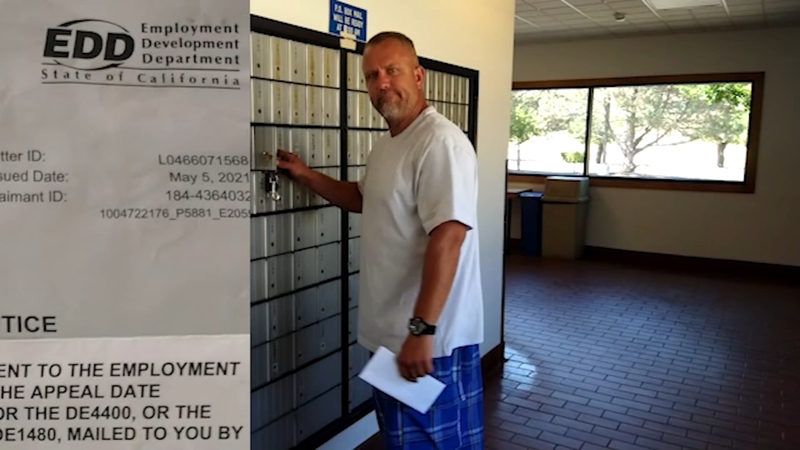 LAKEPORT, Calif. -- A Northern California man feared running out of both time and money after the EDD ordered him to give back benefits it already gave him.

The matter took on added urgency because his benefits have been frozen until this is resolved. He can't understand why EDD is doing this to him.

James Carling feels as if he's being squeezed.

The EDD believes he is in prison and ineligible for unemployment.

Carling received a notice on May 5 ordering him to return his benefits.

"I'm confident I don't owe them the money," Carling said.

The same letter on May 5 told him to "disregard this notice" if he had filed an appeal.

"My appeal hearing was on the 25th of May. Nobody showed up on EDD's behalf," Carling said.

Yet EDD sent him a letter threatening to levy his tax refund if he didn't repay his benefits before August 15.

"It's comical at this point because I don't know. I don't know how it's their policy to do that," he said.

EDD tells our sister station KGO-TV inmates are using the identities of citizens outside of prison to collect benefits illegally.

He's banking that a favorable appeal decision will be handed down by EDD's August 15 deadline.

Such decisions are reportedly taking more than 3 months -- which would put a decision on James' appeal closer to August 25, 10 days after EDD's deadline for Carling's to go into collections.

"Right now it makes me feel kind of angry," a frustrated Carling said.

We contacted EDD and it forwarded the information to its claims branch. However it says it is forbidden from commenting on specific cases.

"They're making a hard situation harder and a bad situation worse," said Carling.

Carling recently received a notice from the administrative law judge informing him that he's won his appeal.

EDD has resumed sending benefits, but only half of what he says he's entitled to. He says he's been told the other half is being credited to repaying his overpayments.

Despite the confusion, Carling is confident this will be sorted out in the end and is grateful for the help.