City officials say they're aware of the issue and say it's been on their radar for quite some time.
KABC
By Leticia Juarez 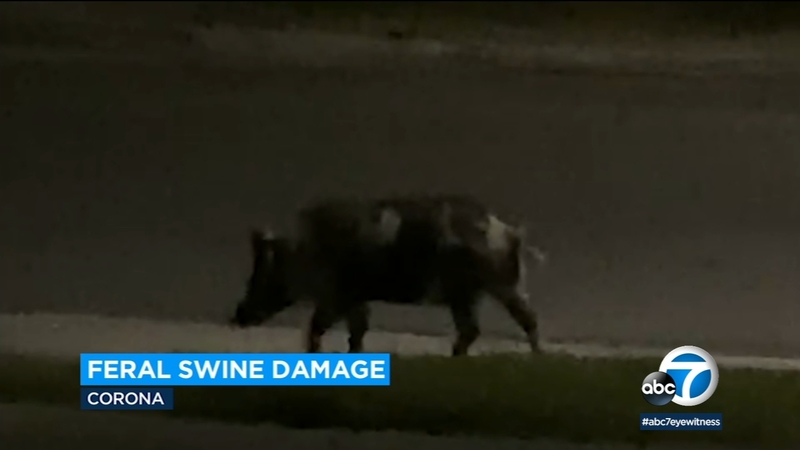 CORONA, Calif. (KABC) -- Wild hogs are running rampant in Corona and residents say it's becoming a growing problem that's posing a threat to the safety of families and pets all across the area.

"The pigs have been coming," said Corona resident Judy Gardner. "They came here to my house on Halloween night, and then they came back on Veterans Day, and probably going to be here for Thanksgiving.

Homeowners have captured the hogs - who have caused significant damage to people's lawns - on home surveillance cameras wandering through neighborhoods.

Six donkeys were killed in Redlands when they were hit by a moving train on Wednesday, and residents believe it's part of an even bigger problem.

"I came down and saw the damage and kind of immediately knew that it was the wild boars kind of tormenting our neighborhood," said resident Julie Chiasson.

City officials say they're aware of the issue and say it's been on their radar for quite some time.

In July, the Corona City Council had an official with the California Department of Fish and Wildlife discuss possible options to deal with the feral pig population, which included allowing homeowners and others the ability to hunt them.

"The options are basically to do trapping or remain the status quo, and unfortunately the status quo, for most, folks is pretty destructive," said Corona vice mayor Wes Speake.

To learn more on the city of Corona's resident services, visit the city's website.

A pair of hikers had a frighteningly close encounter with a mountain lion while on a trail in Orange County.