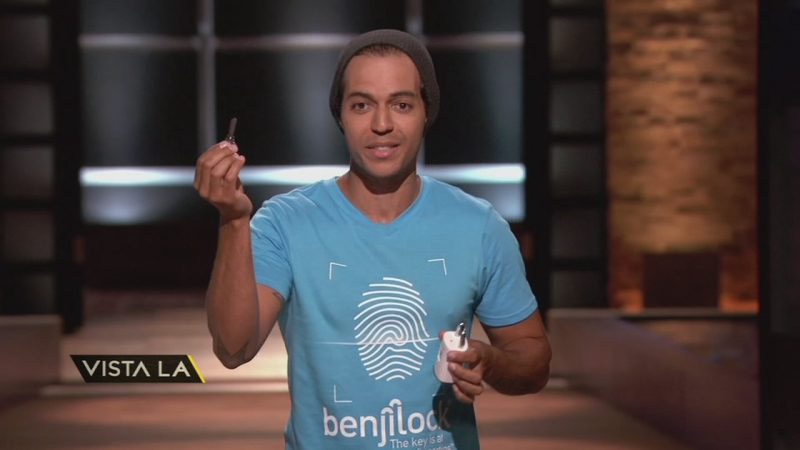 LOS ANGELES (KABC) -- Out of work, overweight and depressed: Robbie Cabral from Los Angeles says a big idea came to him when he was in a dark place.

"The same day I got laid off, the same day my younger daughter Livia was born, I said to myself, my wife is going back to work, I'm gonna have my three kids. What's next for me?" said Cabral.

He came from the Dominican Republic in pursuit of the American Dream. He did everything from janitorial and housekeeping to catering and real estate marketing.

Cabral became a stay-at-home dad and started getting back in shape by going to the gym.

"I noticed for some reason how people were using their locks. So it kind of started circling there. I went back to the house, and I just started doing sketches and coming up with ideas and concepts," he said.

Cabral said he couldn't get the idea out of his head and continued working on it relentlessly for about three years. He pushed the idea and created the BenjiLock, the world's first padlock with fingerprint technology. Cabral had no technology or engineering background.

Then in 2017, armed with a patent, Cabral went to the Consumer Electronics Show (CES) to introduce his prototype. Competing against multi-million dollar companies, the small-but-genius BenjiLock won the coveted innovation award.

"Everyone said 'Wow that's a great product. How can I buy it?" And I'm like, I don't know, I'm like just a guy you know with an innovative idea that came with a prototype, people love it but I don't know what to do next?" Cabral expressed.

As fate would have it, ABC's hit show "Shark Tank" was holding auditions in the same hotel as the electronics show. Selected amongst thousands, Cabral got an offer from all but one shark, and after an intense decision-making process, Cabral chose Kevin O'Leary, known to fans as "Mr. Wonderful."

"Everybody wants that lock! This is going to be a legendary and iconic story. There hasn't been an innovation in a padlock for 2000 years ... and Robbie basically changes the world!" O'Leary said.

O'Leary expressed to Cabral that they needed to find a 100 percent American company so they could turn this story into his American dream. They teamed-up with Hampton Products, a leading innovator in security hardware, based in Orange County.

"In 2017, our team was very aware of all the buzz that was going around on Robbie's booth, and we said, a fingerprint padlock? First, we were thinking, why didn't we invent that? But second, we wanted to see how it works, so we met Robbie, and from our perspective that was the missing link," said Kim Kelly, the CEO of Hampton Products. "We knew we would have a way to communicate the value of BenjiLock to everybody in North America and maybe even around the world!"

"I think it's the biggest idea in locks since the invention of the key," Kelly said.