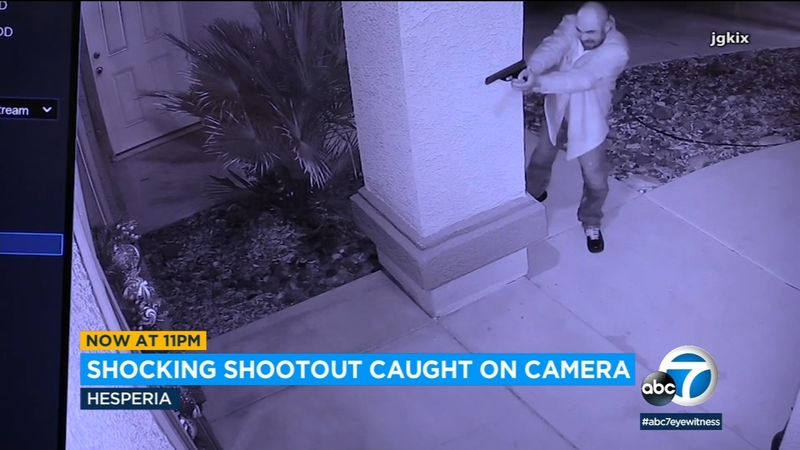 HESPERIA, Calif. (KABC) -- A Hesperia homeowner fended off an armed man who was trying to break into his home, exchanging gunfire until the man ran away.

The wild early-morning shootout was caught on camera - and the suspect turned out to be a neighbor who lived only a few doors down.

The incident happened early Monday morning, when the family heard someone trying to break into their home.

"I see him - he's trying to kick the door in, demanding to come in. Then I see him pull out a gun."

The homeowner ushered his wife and child into a closet for safety while he went to grab his own gun.

He came back to the front door and could see the man pointing his gun. At that point, they both started shooting at each other through the door.
The two exchanged gunfire through the door for less than a minute before the man ran away on foot, firing a shot at another home in the neighborhood as he fled.

A few minutes later, sheriff's deputies showed up and eventually found and arrested the suspect in the neighborhood. The homeowner said the man turned out to be his neighbor, but they didn't know each other or have any previous interaction.

The home was left with bullet holes in the walls and doors. The homeowner was armed with a 9 mm and says from the bullet casings it appears the intruder had a .22.

The sheriff's department later identified the suspect as Erick Contreras, 39, a resident of Hesperia. Contreras was arrested and booked for attempted murder, shooting in an inhabited dwelling, attempted robbery and felon in possession of a firearm and ammunition.

There have been several other incidents in recent years of homeowners in Hesperia shooting intruders:

A Hesperia man was shot and killed after he forced his way into a home in the middle of the night, authorities said.

A homeowner shot a man who was allegedly trying to break into a Hesperia home Thursday night.

A man who allegedly tried to break into a home in Hesperia was hospitalized after being shot by a resident during a confrontation, authorities said.