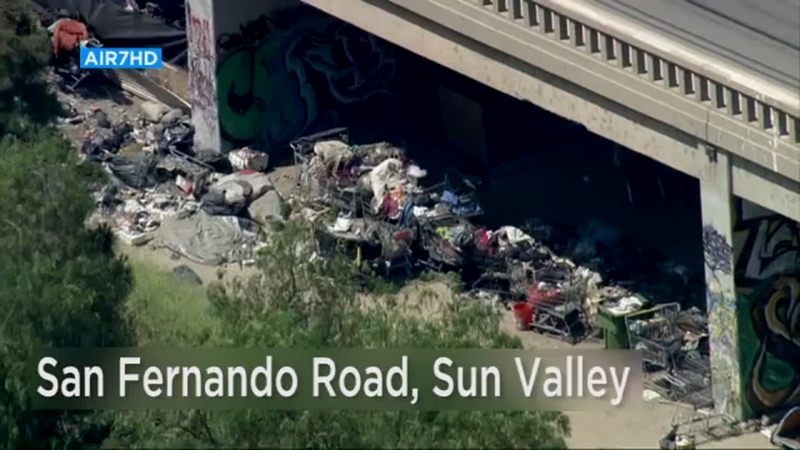 View from above shows homeless problem in San Fernando Valley

LOS ANGELES (KABC) -- After spending the last couple of days in the Los Angeles basin to survey the city's homeless crisis, Chris Cristi from AIR7 HD flew over the San Fernando Valley, where thousands of homeless people live.

Watch an AIR7 HD tour of homeless encampments all across the San Fernando Valley.

Of the 60,000 homeless residents in L.A. County, 8,000 live in the San Fernando and Santa Clarita valleys - many of them homeless veterans.

A tent city was found right along train tracks near Winnetka Avenue and Nordhoff Street through Chatsworth.

Homeless in L.A.: Scope of growing problem can be seen in aerial tour of city
EMBED More News Videos

AIR7 HD took a tour of downtown Los Angeles to highlight just how bad the homeless crisis has become, showing a landscape dotted with tents throughout the area.

Right behind a little league baseball field in Pacoima, near the 5 and 118 freeways, a group of tents was seen, some of the tents with solar panels.

In Lake View Terrace, right next to the Hansen Dam Aquatics Center, several tents were spotted all around. Many of them appeared to be built like tree houses among the greenery.

You can get a sense of the scope of the Southland's homeless crisis when you see it from the air. On Wednesday, Chris Cristi from AIR7 HD surveyed what can really be called the epicenter of this crisis - Skid Row.

Several homeless residents were seen living under an overpass just north of the 5 Freeway in Sun Valley.

Within the trees, blue tents dotted the landscape at the Sepulveda Flood Basin near Burbank Boulevard.