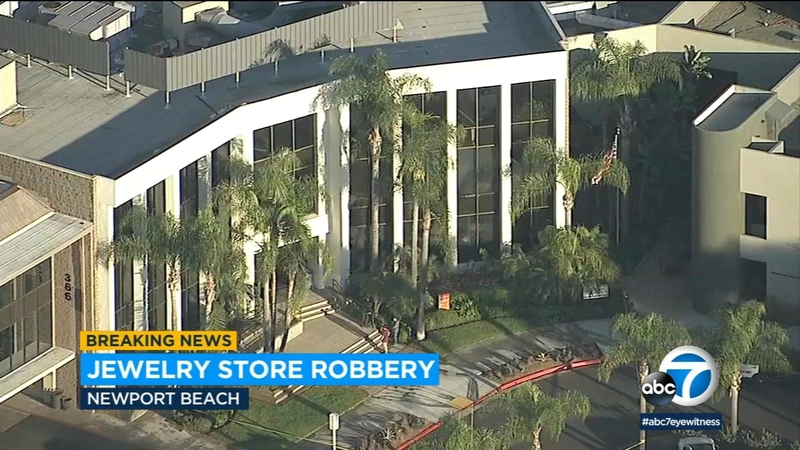 NEWPORT BEACH, Calif. (KABC) -- Police are looking for a group of suspects they say went into a jewelry store in Newport Beach armed with hammers and took off with several items, leaving workers fearing for their safety.

It happened at the JB Diamonds & Fine Jewelry store next to Fashion Island on Monday at around 3:30 p.m.

A spokesperson for the Newport Beach Police Department tells ABC7 someone called saying they saw the four suspects going into the store wearing hoodies, masks and gloves.

The spokesperson said witnesses told officers at the scene the suspects were armed only with hammers. They said they shattered display cases and took off with several items.

Witnesses said the group took off in a black vehicle, though details regarding the make and model weren't immediately available.

Eyewitness News spoke with a woman who said she works at the jewelry store and said she stopped by to check on her co-workers. As of Monday at 5 p.m., she said she hasn't been able to get in touch with them.

It's unclear if the woman was working when the incident happened, but she told ABC7 officers are not reporting any injuries.

Meanwhile, a description of the suspects has not been released.

"The issue of crime and violence is top of mind all throughout not only the state of California but across the United States, highlighted recently by some high-profile retail theft operations," Newsom said.

The area near the store has since been blocked off as officers continue their investigation.