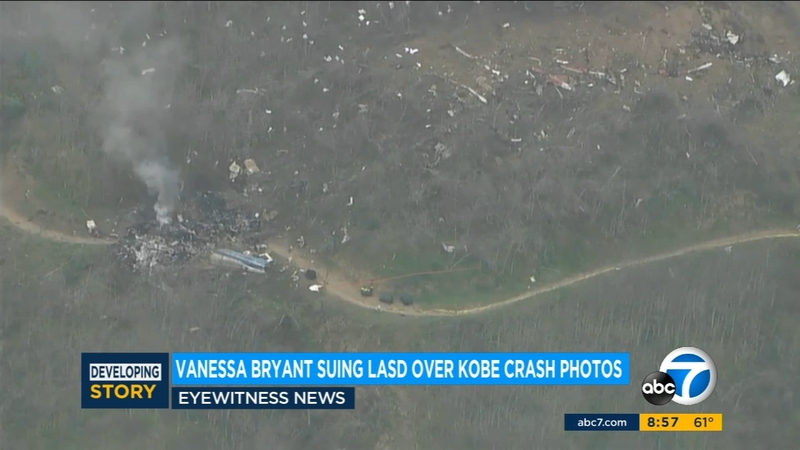 Deputies allegedly took personal cellphone photos -- and were then told by Villanueva to delete them -- in the aftermath of the Jan. 26 accident in Calabasas. The sheriff said the department has a policy against taking and sharing crime scene photos, but it does not apply to accident scenes.

The suit seeks damages for negligence, invasion of privacy and intentional infliction of emotional distress.

In early March, Vanessa Bryant's attorney said in a statement that she was "absolutely devastated" that deputies reportedly shared the graphic photos of the crash scene where Bryant, their daughter and seven others were killed.
EMBED More News Videos

Los Angeles County Sheriff Alex Villanueva said eight deputies were involved in taking graphic photos from the site of the helicopter crash that killed Kobe Bryant and eight others.

The victims died when the helicopter crashed into a hillside during cloudy weather. They were traveling to a youth basketball tournament at Bryant's sports facility in Thousand Oaks.

Attorney Gary Robb says Vanessa Bryant personally went to the sheriff's office the day of the crash and requested that the area be protected from photographers.

The crash remains under investigation by the National Transportation Safety Board.

Vanessa Bryant's lawsuit alleges the sheriff's actions constituted a "cover-up" of the misconduct.

"Mrs. Bryant feels ill at the thought of strangers gawking at images of her deceased husband and child and she lives in fear that she or her children will one day confront horrific images of their loved ones online," according to the lawsuit.

The sheriff's department did not immediately comment on the matter Tuesday. Robb, Vanessa Bryant's attorney, declined to comment.