"Let's let it take us as far as it can take us, if we're serious about being impactful," Councilman Herb Wesson said.
KABC
By Anabel Munoz 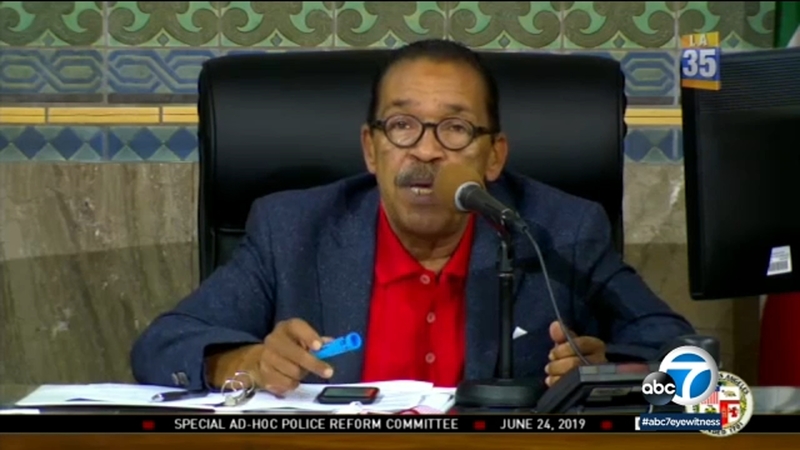 LOS ANGELES (KABC) -- When the L.A. City Council's special police reform committee meeting began this week, Councilman and Chair Herb Wesson called on his colleagues to make history. "Let's let it take us as far as it can take us, if we're serious about being impactful."

Among the eight motions the committee unanimously passed, one measure calls for diverting non-violent calls from the LAPD to unarmed crisis response. There were questions and concerns raised over wording that also stated "non-criminal."

"As I'm sure we're all aware are very, very different. In the city of L.A., sleeping on the street, can be a criminal action," said one speaker during public comment. Wesson's office told Eyewitness News that although the word non-criminal is written in the motion, the policy would focus on non-violent cases.

Amid growing calls from activists for the LAUSD to defund the school police department, board members on Tuesday discussed the future role of policing on campus.

Another measure directs the LAPD to report how it will investigate allegations of misconduct during recent protests.

"Any sort of motion to have the LAPD investigate themselves should be eliminated and rethought," said another speaker.

The community members who called in overwhelmingly expressed support for the People's Budget L.A., a coalition started by Black Lives Matter Los Angeles. They are proposing a divestment from law enforcement into community resources.

"After 24,000 people filled out the survey, results showed that people thought only 1.6% of the budget should go to law enforcement," said Ricci Sergienko.

Their goal is to eventually abolish police and replace it with a new public safety model.

The United Teachers Los Angeles union is calling for the elimination of the Los Angeles Unified School District police department amid widespread demands for sweeping police reform across the country.

"We shouldn't be so tied down and construed to the fact of our current police state. If we want to move past these racist systems, then we have to reimagine what that kind of public safety will look like," Sergienko said.

Councilmembers in the committee all voted in favor of the motions aimed at reshaping law enforcement, while expressing their sometimes opposing views on different aspects of the movement.

"If we did what we're being asked to do and we defunded the police and in a week they were gone, I think that would be the worst decision the City Council has ever made. I think the city would look a little bit like the movie 'The Purge,' but I think we can do all of this thoughtfully and in a timely fashion, and to make the city of Los Angeles a better and safer place," said Councilman Paul Koretz.

"As recently as January, I got pulled over by LAPD in my own district, and had to have an individual stand over me holding a gun in their holster, while they asked me to roll down my windows and do a whole host of things and asked me why I had a government car in this part of town," he said.

"The reason I stood up for the LAPD the other week was because I just didn't think that the change that has happened within the LAPD has been acknowledged," said Councilmember John Lee.

Councilman Gil Cedillo expressed support to divert some issues away from law enforcement, including matters addressing homelessness, while pointing out constituents disagree on how to respond.

Former Saturday Night Live comedian Jay Pharoah says he was held at gunpoint by LAPD officers and one of them kneeled on his neck.