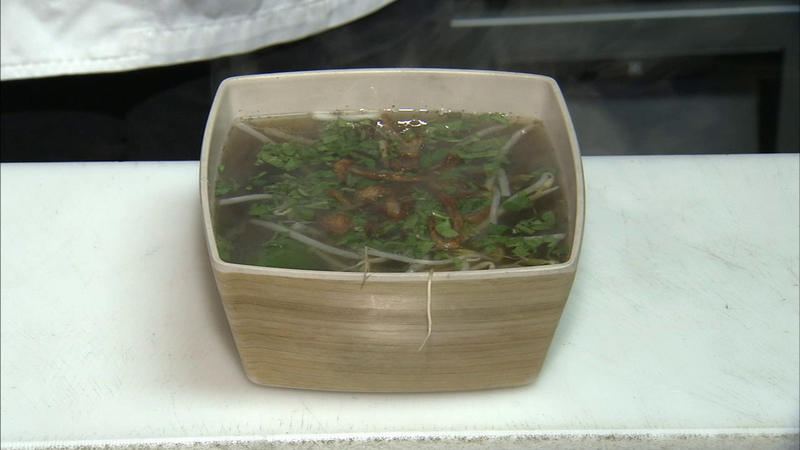 LOS ANGELES (KABC) -- There's a new food trend brewing, and giving juicing a run for its money. Even though it's centuries old, bone broth is popping up all over Southern California.

"It was something that my grandmother always made for the whole family," said Grace Nguyen, executive chef at Asian Box. "She would be outside with this gigantic pot cooking this beef pho for like eight hours."

Nguyen says bone broth, once a part of her everyday meal, is now a very hot item at Asian Box.

What is bone broth?

"Lots of aromatics, tons of ginger, onions, scallions just to clarify the broth, some spices like star anise [and] cinnamon, different types of beef bones and we actually throw in a piece of brisket in there too," said Nguyen.

Bone broth is often used in dishes with Vietnamese noodles called pho and Japanese ramen. But due to the popularity of Paleo diet, broth is trending.

Wellness consultant Bizzie Gold says it may be hot now, but it's not a new idea.

"An ancient South American proverb talks about how a good bone broth will raise you from the dead," she said.

At the very least, this broth can ply your body with a host of nutrients.

"The gelatin in the bones, which is what's leached out during the process of cooking for typically over 24 hours, is really great for intestinal health benefits, it gives you a lot of essential amino acids that are typically lacking from a traditional American diet today," said Gold.

It's also said to be great for skin and nails, plus...

"It's really moving everything through your digestive tracks so you can stay healthy and really eliminate toxins from your body," said Gold.

In terms of health, if you're having it in lieu of coffee, it's a caffeine, dairy, and sugar-free way to feel full and stay hydrated. But you do want to watch your sodium and also check the bones. The better the bones, the better the nutrition.

"If you're going to try this at home, go to your local supermarket and ask your butcher for more natural meats -- grass-fed bones, no antibiotics, no hormones fed or anything like that," Nguyen advised.