Across the state, public school enrollment dropped by an unprecedented 160,000 students this year. Many still enrolled haven't been showing up. Officials say communication and outreach are keys for both the near future and post-pandemic.
KABC
By Lisa Bartley and Grace Manthey 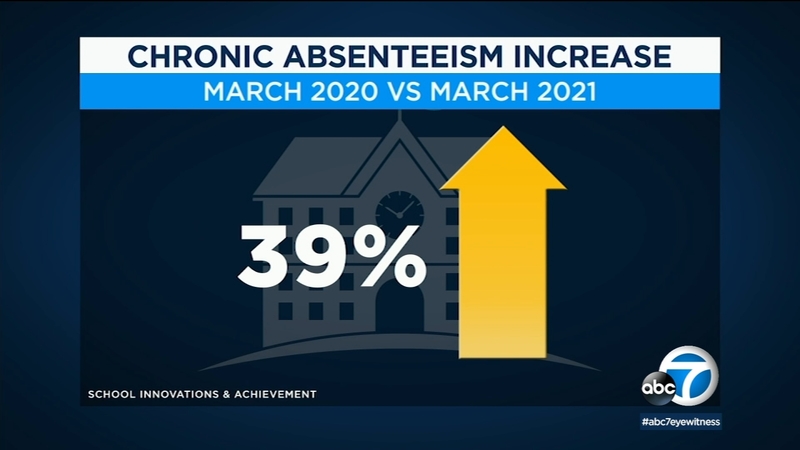 ANAHEIM, Calif. (KABC) -- On a sunny weekday afternoon at Loara Elementary in Anaheim, third-grade teacher Megan Lee floats around her classroom helping her students with the floor plans of their "dream houses," a math lesson involving crayons and graph paper.

The kids sit at individual, spaced out plastic shield-clad desks, their masked faces bent over their papers as they draw boxes with labels like "game room," and "movie theater."

"I love them so much," Lee said. "They're so sweet online and in person...they're just such a light in this world. And they are the next generation growing up."

"You know, it's just such a joy to be teaching them," she added, laughing as she said she was starting to tear up.

Levi Leyva is one of Lee's students. Levi's father works in construction and his mother is a medical assistant at an imaging center. Both were lucky enough to keep their jobs during the COVID-19 pandemic, but couldn't work from home to help their son with his online school work.

"With the pandemic, his education definitely took a hit because we couldn't be there," said Levi's father, Guillermo Leyva.

When Leyva and his wife heard their son had been missing a lot of school, they were able to cut down on some work hours to be with Levi and help him catch up.

"The school was very supportive. They answered all of our questions, they taught us how to use the system and the platforms, and now he's doing good," said Leyva.

Lee said once she was able to communicate with Levi's parents about how her and the school could be a support system for the Leyva family, Levi became what she calls a "success story."

According to data from School Innovations and Achievement, a company that offers software and services to schools aimed at improving attendance, chronic absence rates increased by 39% from March 2020 to March 2021 across SIA's 33 California school district partners in 18 counties. SIA defines chronic absenteeism as missing more than 10% of the school year.

"So, what has happened with school closures in the pandemic, and sort of this immediate shutdown in schools is it's just shined a light and exacerbated." Peterson said.

There have been multiple struggles related to attendance during the pandemic, said SIA Operations Manager Brenda Tapp. Not only are there barriers like what Levi Leyva's family went through, with both parents working, but there are digital divide problems, a lack of infrastructure to address huge absence increases and even different definitions of attendance and participation.

"There's many, many barriers and multiple barriers that could apply to one student. There's a lot of challenges for our kids this year," Tapp said.

But attendance isn't the only thing plaguing California schools in the COVID-19 era. Many parents chose not enroll their student at all.

Across the state, public school enrollment dropped an unprecedented 2.6% between the 2019-2020 and the 2020-2021 school years. In past years, changes in enrollment have normally been less than 1%.

Nearly 61,000 of the 160,000 kids lost to California schools were kindergarteners, according to enrollment data from the California Department of Education. Kindergarten isn't required by state law.

White students accounted for nearly half of the drop in enrollment, but less than a quarter of the state's student population is white.

For comparison, students of color accounted for just over half of the decrease in enrollment, even though they make up more than three-quarters of the state's public school population.

State Superintendent Tony Thurmond said in an interview that the state is just beginning to understand where these students went. He said he's heard initially, some may have moved out of state, some were homeschooled, some may have gone to private school and some students may "never have checked in during the pandemic."

Private school enrollment, at least those with six or more students, is also down about 6%, according to CDE numbers.

The number of filed private school affidavits more than doubled in October 2020, the main filing period.

"So, what we're doing now is working with districts to dive into that data and make sense of where those students may have gone and the use of family engagement strategies to really reach out to those families and say, we want you back," Thurmond said.

Getting those students back into state schools could be imperative for future funding.

California school finding is calculated through the Proposition 98 Guarantee, and a large portion of that funding uses the Local Control Funding Formula, or the LCFF.

The LCFF is based on average daily attendance - essentially, the number of students that are at school on an average day. A student who was at school every day would count as one student towards ADA. When enrollment and attendance drop, so does ADA.

Districts have until the 2022-2023 school year (the school year after next) until any drops in ADA could affect their funding. A pandemic-era law exempted this school year's ADA from affecting funding, and an existing statute will allow districts to carry over that exemption into the 2021-2022 school year as well, according to state officials.

Each student is worth roughly $13,000 through the Local Control Funding Formula. If, for example, state schools are still missing 50,000 students by 2022-2023, districts could lose up to $650,000,000 in that school year. Officials say there are some more nuances to the formula, but in general it reflects what's possible in regards to funding changes.

Superintendent Thurmond acknowledged the future impact fewer students could have on school funding. It's why he said he's talking with legislators and individual school districts about how to develop a strategy to address the declines in enrollment.

"We know that that means two things. One: Students are aren't accounted for and we need them to be. And we want to make sure that there's no financial impact to our school districts," Thurmond said.

Getting kids back enrolled and actually showing up to school again is about more than just money.

"What we know is that attendance is the number one predictor of dropouts and graduation rates," SIA's Peterson, said.

And unfortunately, said SIA's Brenda Tapp, getting back to normal isn't going to be from "a flip of a switch where everybody's back next fall."

"We've got a good probably five to 10 years journey ahead of us, as the impact of the last year and the amount of learning time has been lost," she said.

Communication was one of the key solutions that Peterson and Tapp discussed around improving attendance.

"We can't over communicate," Peterson said.

That includes effectively communicating problems, the processes that could be solutions to those problems and finally, the outcomes of those solutions.

"It really comes down to early identification, early intervention, actively communicating in native languages when required, offering support, and then using data to inform and drive new action as you go," Peterson said.

Tapp added that she's seen some schools hesitant to reach out to parents, afraid to bother them during these stressful times.

Communication is a solution that Megan Lee, the third-grade teacher from Loara Elementary, witnessed first-hand. Some parents were hard to get ahold of during working hours, as they were working themselves. But, after figuring out times that worked for different parents they were able to find solutions.

"Just building that relationship with the parents, it actually helped the child to be successful," Lee said.

It definitely helped Lee's student, Levi, according to Levi's father.

"I've been hearing nothing but good things now from his teacher Ms. Lee and the principal," said Leyva.

Sometimes it takes more than just calls and emails.

During the pandemic, Indio High School Assistant Principal Richard Pimentel has been taking weekly road trips out to the find students missing from his school.

His search takes him to homes, migrant camps, motels and homeless shelters.

"I see a lot of kids sleeping, my job is to wake them up, shake them up a little bit and let them know that we're there," Pimentel said. "And I don't want to put all the blame on the kids because there's so many circumstances they've been unable to control."

"We really want to get those kids, particularly connected and these are the most vulnerable kids in our district who are really struggling to have high levels of chronic absenteeism," Vicondova said.

Vicondova said reaching out to students and families is something they've always done, but have now repurposed it for the pandemic and chronic absenteeism. She said the district also involved community members.

"It's really become a community event as opposed to just our district event," Vicondova said.

The future lies with the kids - and they are 'resilient'

With students returning to the classroom in-person, teacher Megan Lee has seen a difference in the mental and emotional connection she's been able to gain with her students.

For SIA, the future of post-pandemic education is really about the "long game."

"This is not a one and done," said Peterson. "You know, improving attendance is a process. It's not a singular event. And so districts really in schools need to be investing in strategies that are going to pay off of now as well as over time, in terms of bringing back kids to school and helping them remediate. And they're only going to do that by showing up."

Peterson also added that this time has also provided a unique opportunity for schools and districts to try new things as they bring students back and embrace new models.

"I would challenge people to look at the processes, challenge their processes, break them if they are considered broken," she said.

For Lee, the struggles of teaching during a pandemic have taught her about the strengths of her students.

"This experience has shown us that they can overcome," Lee said.

Even if they're behind, she believes they'll catch up.