San Bernardino Co. sheriff opens up about current state of jails and more in one-on-one with ABC7

In an exclusive interview with Eyewitness News, Shannon Dicus spoke at length about his first four months as sheriff.
KABC
By Rob McMillan 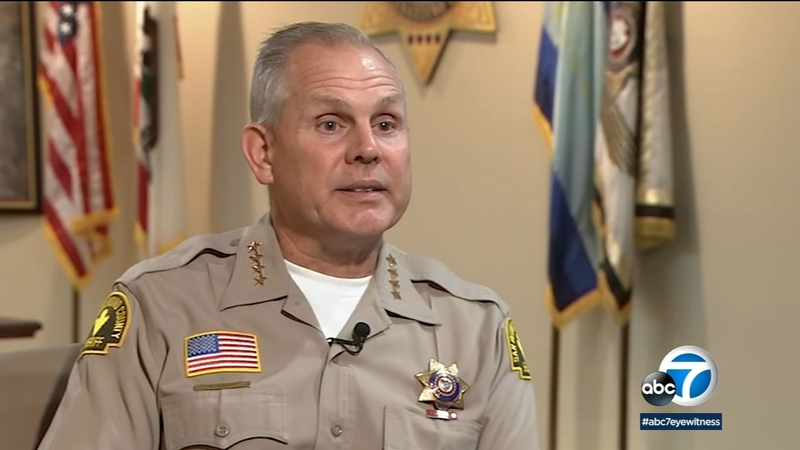 Now, Dicus is about to embark on a journey he's never experienced before: he's running for public office for the first time as he's slated to be up for election in June 2022.

"I can honestly say the political side of being sheriff, no matter how it's been pointed at you, no matter what type of help you've had, it just feels different," said Dicus.

In an exclusive interview with Eyewitness News, the 30-year veteran of the department spoke at length about his first four months as the county's top law enforcement official. In recent months, several in-custody deaths have been reported at the West Valley Detention Center.

Plus, a San Bernardino County Sheriff's deputy is now facing criminal charges after he was caught on camera kicking a suspect in the face.

The violent arrest occurred after investigators said the suspect would not stop for a traffic violation and led authorities on a dangerous motorcycle pursuit.

San Bernardino County Undersheriff Shannon Dicus discusses an incident in which a deputy is seen kicking a suspect in the head.

"Obviously, law enforcement right now is always in the news," said Dicus. "Generally, it's bad in terms of this national philosophy, defunding the police, you can pick a number of things we hear."

Critics have wondered why the deputy involved wasn't fired immediately.

"What the public doesn't always understand is that there's also an administrative investigation that goes along with that," said Dicus in response to the criticism. "It's part of the peace officers bill of rights."

The deputy remains on paid leave, stripped of his badge and gun for the time being. While Dicus could have fired him right away, there's a chance that would result in an expensive arbitration process, especially if he's later found not guilty.

Dicus said if the deputy is no longer an employee, he wouldn't be required to give a statement to internal affairs.

"During that administrative investigation, we sit directly across from the officer and order them to tell us what happened in that event," explained Dicus. "They don't have the right to remain silent or their deemed insubordinate and they will be terminated. So when you take both of those processes together, assuming a crime has occurred, you forward it to the D.A."

Dicus also addressed the increase in the number of in-custody deaths in county jails, which include drug overdoses and suicides. He said 10 years ago, about a third of jail inmates suffered mental health issues. He estimates now that count is close to two thirds of inmates.

"The largest mental health hospital in the county of San Bernardino is inside our West Valley Detention Center, just to give you an idea of the impact of this," he said.

Dicus adds that staffing continues to be an issue and says about 40 registered nurses are needed.

"On the medical side, particularly since the pandemic, a nurse is so hard to hire, especially because they're needed in so many places across the nation, and that's probably our biggest struggle," he said.

He believes many inmates dealing with mental health issues shouldn't be in the jail, but admits there's nowhere else for them to go as many mental health facilities have been closed for decades.

"The jail is used as a human deposit box, and that's terrible," said Dicus. "All of these pressures are being loaded onto law enforcement to intervene, and now, build these capacities more at the incarceration level."

Another top priority for Dicus is recruitment. However, getting more deputies on board has been difficult, according to Dicus, and reaching out to students, in some cases, has been disappointing.

"I just asked those kids, 'How many of you want to be a law enforcement officer?' ... not one of them raised their hands," recalled Dicus.

The next seven months won't come easy for Dicus, but he vows to work for his community and the department he leads.

Earlier this year, he announced his intention to equip all of his deputies with body cameras. He hopes they'll be able to implement the program this winter.