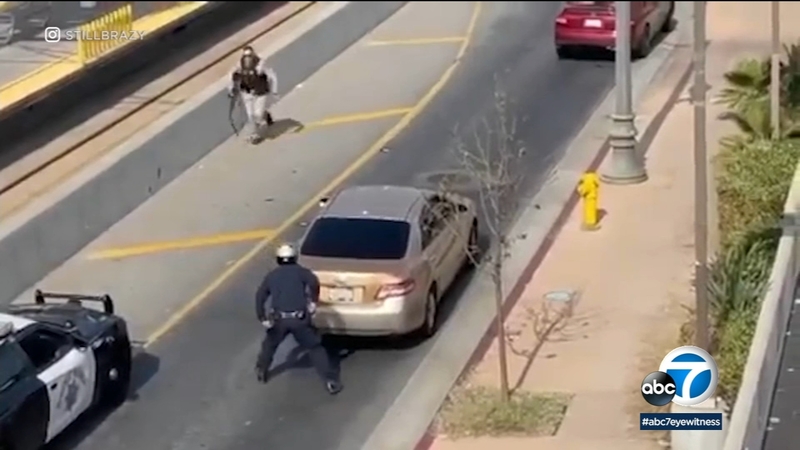 Suspect wounded after CHP, deputies are fired upon in East LA

EAST LOS ANGELES (KABC) -- A suspect who fled after being involved in a shootout with a California Highway Patrol officer earlier this week has been arrested.

On Tuesday, a California Highway Patrol officer and L.A. County sheriff's deputies "came under fire" in what authorities described as an ambush in East Los Angeles.

The CHP officer was driving a patrol cruiser about 9 a.m. when he "came under fire" at the intersection of Third Street and Ford Boulevard, authorities said.

One of the suspects was shot and remains hospitalized, though his condition remains unknown. The second suspect fled the location, but was found on Thursday.

According to an update issued by the Los Angeles County Sheriff's Department on Friday, the second suspect - who was identified only as a Hispanic man - was taken into custody in Montebello.

LASD deputies who were in the area were also shot at by the gunman, and they along with the Highway Patrol officer returned fire, Thomas said.

No law enforcement personnel were injured. A handgun was recovered at the scene, according to authorities.

Video from AIR7 HD showed the rear window of a Highway Patrol car was completely shattered.

Bystander video captured the moment a barrage of bullets were fired during the shooting.

Investigators were looking to examine surveillance video for possible footage of the shootout, the Sheriff's Department said.

The suspect's motive in the shooting was under investigation.