After 30 years, the corner is being redeveloped and a groundbreaking ceremony was held Friday.
KABC
By Leo Stallworth 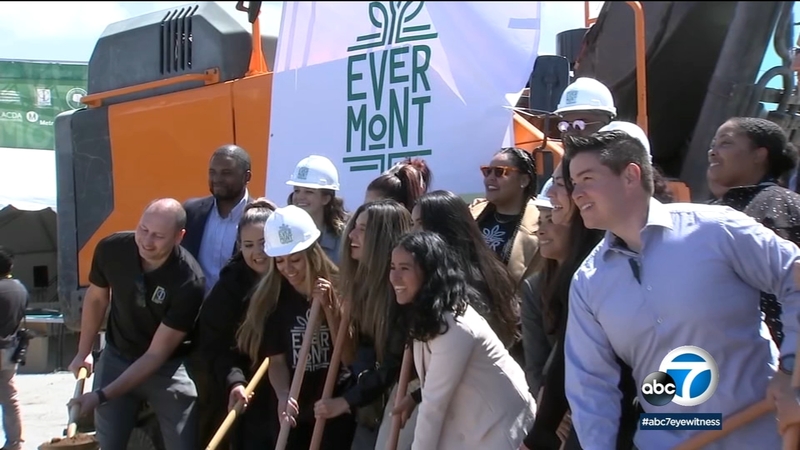 SOUTH LOS ANGELES (KABC) -- An empty lot at Vermont and Manchester avenues in South Los Angeles was once buzzing with activity, businesses and more.

It was destroyed during the 1992 civil unrest triggered by the "not guilty" verdicts for four LAPD officers who beat Rodney King.

But after 30 years, it's being redeveloped and a groundbreaking ceremony was held Friday.

Los Angeles City Councilmember Marqueece Harris-Dawson, who represents the city's 8th district, had been fighting for this move for years.

"I want to start by congratulating you for bringing this to victory," said Dawson during Friday's groundbreaking.

Dawson said it took bold moves by the city to retain the land through eminent domain in order to finally break ground on what will be a redeveloped hub filled with retail, housing and on one side, a boarding school that's already under construction for at risk youth.

Officials said a much needed part of this project includes a grocery store.

He said L.A. County along with the city, the Metropolitan Transportation Authority and several banks are funding the project.

"We had to pull together a coalition of partners in order to make this a reality," said Dawson.

Dawson credits a big voice in the community for leading this effort: Mark Ridley Thomas.

"He went to the [Los Angeles County Board of Supervisors] and said, 'This process has gone on too long, and we are going to go to the courts, and ask the courts to deliver this land to the people of Los Angeles County so that they can develop it into something that meets their needs," said Dawson. "So today, we celebrate the culmination of that struggle."

The new development will be called "Evermont," a name L.A. County Supervisor Holly Mitchell said the community picked themselves.

"I think it represents like forever Vermont," she said.

The project is expected to be completed within the next two years.

"My child gets to grow up here where it's developed, where we could put our two cents in to make sure that they have a thriving chance in their own community," said South L.A. resident Afreca Howard, who said it's an honor to be a part of such as historical process.