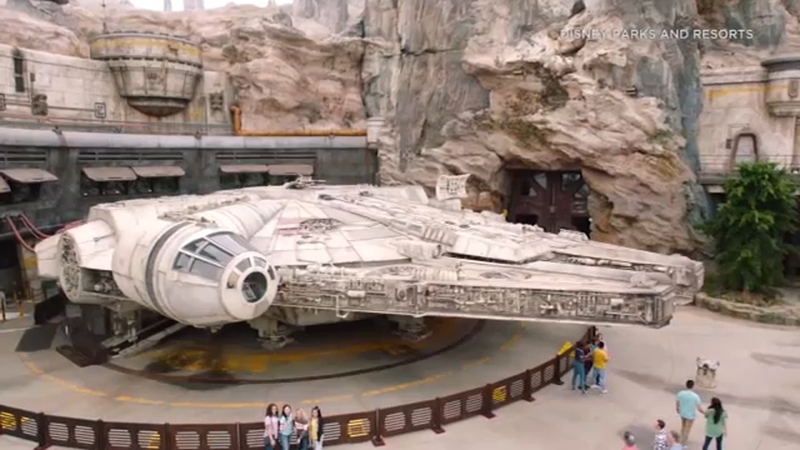 Star Wars: Galaxy's Edge - Everything you need to know

ANAHEIM, Calif. (KABC) -- Are you ready for an epic adventure to a galaxy far, far away? Here's everything you need to know about Star Wars: Galaxy's Edge, the highly anticipated new land inside Disneyland Park.

When Galaxy's Edge opens on May 31, it will make history as the largest, single-themed expansion ever in a Disney park.

ABC7 got our first look at the massive, 14-acre land, transporting guests to the Black Spire Outpost on the planet of Batuu. Batuu is a far-flung destination along the galaxy's Outer Rim on the frontier of Wild Space, the uncharted region beyond all known star systems. The planet is home to Black Spire Outpost, an infamous port for smugglers, traders and adventurers wishing to avoid any unnecessary entanglements with the First Order.

Visitors to Star Wars: Galaxy's Edge will have their choice of a variety of unique food and beverages, a unique concept developed over the last four years.

The offerings will include Fried Endorian tip yip with green gravy, blue milk, Ronto Wraps and a variety of exotic non-alcoholic drinks like the Sour Sarlacc or Tatooine Sunset.

Guests can also walk through a bustling marketplace, where vendors offer various local delicacies, including an Outpost Mix of flavored popped grains from Kat Saka's Kettle, a unique popcorn snack with a combination of sweet, savory and spicy flavors.

Imagineers say they collaborated with Lucas Film to tell a unique story while including iconic details like the Millennium Falcon, blue milk and other elements from the different eras of the "Star Wars" universe.

In Millennium Falcon: Smugglers Run, guests climb into the cockpit of "the fastest hunk of junk in the galaxy" for their own "Star Wars" adventures. They take the controls of the Falcon in one of three unique and critical roles as the ship hurtles through space. Some will be pilots, some gunners and some engineers, creating multiple ways for guests to engage with the attraction in an experience that responds in real time to the actions they take.

Guests will also be able to spot hidden gems throughout the land like the Dianoga from the Death Star's trash compacter.

"For the first time, we're actually bringing 'Star Wars' to life with all the senses," said Scott Trowbridge, portfolio creative executive from Walt Disney Imagineering. "We've seen and heard what it sounds like on the big screen. But when you're walking through it, being able to feel the textures, the ground you walk in, the smells of the street market and the kind of street food that's served there."

Part of creating your own story at Star Wars: Galaxy's Edge is choosing whether you're going to be part of the First Order or the Resistance, or a smuggler. The people of Batuu will interact with you accordingly.

"We want you to be able to play and engage as deep as you want and immerse yourself in this wonderful world," said Kerrison. Galaxy's Edge offers plenty to eat, drink, see and purchase. Just remember, until June 23, you'll need a reservation to spend your four hours at the immersive land. After June 23, it will be open to Disneyland guests.

"We want you to believe you're not on Earth anymore, that you're truly on this planet Batuu and you are actually meeting these characters," said Kerrison.

When guests arrive at Black Spire Outpost, they will come across aliens, droids and other inhabitants of this planet as they search for rare and unique goods, discover unusual food and drink, or join a crew seeking adventures. Along the way, guests may encounter some familiar faces, including Rey, Chewbacca or even Supreme Leader Kylo Ren and his Stormtroopers. It's here that guests are welcomed to interact with the smugglers, aliens and droids that have landed on the planet.

"Way, way back when it was actually a bustling trade planet, but with the advent of hyperspace it fell by the wayside," said Kerrison.

Speaking of trade, fans are sure to return home with plenty of loot.

Most of the merchandise you'll find at the shops inside the remote outpost of Batuu is only available at Star Wars: Galaxy's Edge. With half a dozen shops throughout the expansion, there are plenty of places for guests to pull out their credit cards. The new merch includes customizable droids and lightsabers, clothes, toys and games.

PHOTOS: Take a look inside the new Star Wars: Galaxy's Edge at Disneyland